REI is a new way of understanding the human psyche. It represents the basics of how our mind operates and explains the background of our thoughts. And even though many historical sources clearly show that ancient civilizations already had this knowledge, it’s unclear how this could have been lost and remained concealed from us for so long.

Any bit of information our body perceives from its surroundings, whether it’s a word we hear, a picture we see, or a smell we notice, turns into data only when our brain processes the sensory perception. The brain can accept or reject and evaluate everything and turn it its own way. So every person unconsciously creates his or her own world from the first moment of his or her life and understands it as the only existing truth. But because we all live in our own worlds, we believe that all the other worlds are the same too and, even though we sense there are differences between us, it’s very difficult for us to imagine how extremely different our worlds really are. These differences and the inability to understand them are the source of all the problems we have in our relations with one another.

We were aware that our thoughts were created by conscious and unconscious processes. But that wasn’t enough to be able to understand the source of the fundamental differences between us. Up until now we haven’t realized that three independent systems operate in our brains, which differ strongly from one another in terms of their characteristics and functioning. Each one of them is a mind of its own and each wants to predominate. Even though they fight for control they can’t live without one another and, even though each is in charge of a different area, one of them can completely drown out the other two. The power ratio between them forms while we grow up, and this, in turn, defines our character for the rest of our lives. Any one of them can rule our world.

The following relations can exist between the minds:

This way we get twelve different compositions, which represent the twelve human characters.

From now on, the three minds described will be called Reason, Emotion, and Instinct. But it must be added right away that their names don’t have much in common with the generally known meanings of these words; so Reason is not rational, Emotion is not emotional, and Instinct is not instinctive.

This table shows the twelve human characters. The size of the letters illustrates the power ratio between the minds. 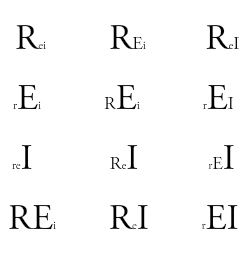 Even just a quick glance at the table of characters shows that the first line shows characters dominated by Reason, the second by Emotion, and the third by Instinct. In addition, the last line includes the “paired” characters, which have special features precisely because of their dual natures. Thus, similar characters can be connected into four groups with similar features.

The minds are completely equal—none is better or worse than another and each has its advantages and disadvantages, although they adapt differently to different circumstances. Instinct performs best in times of scarcity, and Emotion is created for abundance. Reason is most effective in rapidly changing circumstances. Thus in specific circumstances an individual mind is more successful than the other two.

Instinct is the oldest mind. His world is based on the various fears he associates with everything and every circumstance. He believes evil dominates over good in the world. His primary task is to protect, so his activity is directed towards identifying danger in the environment. His defense is to flee. Instinct is extremely cautious, suspicious, and usually pessimistic. His key motive is envy. He’s hard-working, conscientious, creative, and curious by nature. Instinct is reserved and the most emotional among the minds because he gets strongly attached to those close to him out of fear of losing them. He more often rules women.

Emotion is the opposite of Instinct. He thinks in pictures, which he combines into mosaics and then connects into a whole. He believes good dominates over evil in life. His primary task is to identify others who are better adapted to the environment than he is. He’s extremely trusting, if not even gullible, and sees everything through rose-colored glasses. He yearns for new experiences, likes to travel, is sociable, and can be frivolous, lazy, careless, and irresponsible. He’s an excellent improviser and a born epicure. He must be the center of attention, so his behavior often resembles that of a child. He’s driven by competitiveness, and his defense is to attack. He more often rules men.

Reason is the youngest mind. He’s analytical and rational, which is why he seems deliberate, mature, and grown-up. He tends to anticipate and plan. Reason is the only mind we’re aware of and so we perceive him as consciousness. He controls words and numbers; he’s accurate and consistent, systematic, and calculating. He’s not creative and doesn’t feel sympathy. He’s driven by greed and rules men and women equally often.

We can’t identify our character on our own. The reason for this is hidden in the fact that we evaluate ourselves using our predominant mind, which always takes our own thinking as the starting point. It’s also hidden in the fact that in reality we have no real comparison with others because we again evaluate them according to our own mindsets. So each mind believes he’s rational, just, and right, which is why people make different decisions in the same circumstances.

Another problem in identifying characters lies in thought processes because different ones lead to the same result. Because we only see the results of people’s thinking, but not also how they reached these results, we all judge their actions in our own way. This is why we keep misunderstanding each other, but we’re usually not even aware of this.